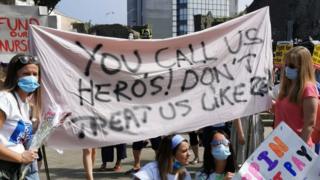 Hundreds of nurses and NHS staff in Wales are protesting at being excluded from a recent pay rise announcement.

Grassroot NHS workers are angry after they were left out of plans to give almost a million public sector workers an above-inflation increase.

Marches on Saturday morning in Cardiff, Swansea, Merthyr and Bridgend are part of a UK-wide protest.

Ministers said they were working with unions to ensure the "best possible" pay package for all health workers.

One nurse said: "To be ignored felt like a kick in the teeth after what we've been through during the pandemic."

Almost 900,000 public sector workers have been given an above-inflation pay rise, including doctors, dentists and police.

However nurses and junior doctors were not included because they agreed a separate three-year deal in 2018.

"We're not saying other people don't deserve a rise - but so do we," said Naomi Jenkins, 29, a staff nurse from Swansea.

"We've worked so hard and been through so much during this crisis, and we still are because Covid hasn't gone away.

"It has been such a scary time for all NHS staff - I even wrote a will in case anything happened to me.

"Each day I came home in tears, worrying I might bring the virus back home to my little girl. Some of my colleagues didn't see their children for weeks, but none of us failed to go to work.

"It was my job to help people, that's what I was made to do and I wanted to do, but I was putting myself and my family at risk - and still am.

"So for the government to exclude us from a pay rise is awful - a real kick in the teeth."

But unions want the UK and Welsh governments to bring it forward to this year to show its appreciation for the response of NHS staff to the pandemic.

The current agreement is said this year to have seen the average nurse receiving an average increase of 4.4%.

However, nurses in the higher bracket of their pay grade said the rise is worth "pennies" each month.

"It's not just about what happened during the pandemic, we've been chronically underfunded for years," said clinical nurse specialist Amy Mainwaring, who has organised the Cardiff march.

"I saw an advert for a litter picker job in London offering a higher salary than me and yet there are nurses who are having to access food banks. It's so wrong."

She said 540 NHS staff died from coronavirus and many nurses "have lost colleagues".

"So when we're ignored from the pay rise, nurses and staff felt it was time to stop standing quietly by. I just hope ministers are listening," she added.

Hundreds of people, mostly NHS staff, are at the four marches in Wales.

They are outside the Senedd in Cardiff Bay, from Castle Gardens to the Guildhall in Swansea, at Merthyr Tydfil fountain and outside the Princess of Wales Hospital in Bridgend.

Staff are hoping they can count on support from the public who regularly turned out to clap for the NHS during lockdown.

Unison said a survey showed 69% of the public think all NHS staff should get an early pay rise before the end of this year, in light of coronavirus.

"The public support we had with the clapping during lockdown was so amazing. It genuinely lifted all our spirits at a very difficult and emotional time," said Ms Jenkins.

An online petition calling for all frontline NHS workers to have an "adequate pay rise" has so far been signed more than 116,000 times.

Nurse Meg Wood said: "Compared with cost of living increases since 2010, we are still earning less than we were ten years ago in real terms.

"Boris Johnson and Rishi Sunak clapped for carers, but don't think we deserve a pay rise. What a joke."

The Welsh Government said a new deal for NHS staff in Wales would be agreed through an independent public pay review.

It said it recognised the "incredible work" done by NHS workers every day and was working with unions to ensure the "best possible" pay package for all health workers.

A spokesperson added: "We remain committed to tackling poverty in Wales which is why earlier this year the health minister announced funding to top-up the pay of those Agenda for Change staff on the lower pay points to bring their pay in line with the Living Wage Foundation's independent recommended real-wage rate from April 2020."