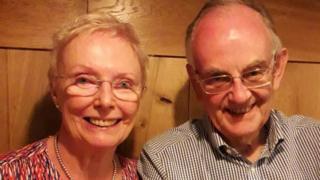 A breast cancer survivor refused a mammogram because she is over 70 said it was an "ageist" policy.

Janet Wilkie, 78, of Kirby Muxloe, Leicestershire, has had breast cancer twice, and both times it was picked up by a routine breast cancer screening.

The government said the pandemic caused examinations for all ages to be held, so now screening will focus on a "core" group and be paused for over 70s.

Mrs Wilkie said the check-ups that saved her life should be available.

She said when she tried to make her three-year appointment a couple of weeks ago and found out about the policy, she felt it was age discrimination, she told the Local Democracy Reporting Service.

"If people want to attend, that should be made possible," she said.

Both times Mrs Wilkie was previously diagnosed with breast cancer - aged 53 and 70 - she had no symptoms so it was only picked up due to screenings, she said.

After their 71st birthday, women stop receiving screening invitations however they are still eligible for one.

The Department of Health and Social Care said due to the coronavirus pandemic, local breast screening services decided to reschedule appointments.

Now they are up and running again, appointments for a "core" group, which include women clinically confirmed as being at very high risk of breast cancer and women aged 50 to 70 due their routine screening, are being prioritised.

"To focus on women in the core programme, self-referrals from women aged 71 or over are currently paused. This will be kept under close review," a spokeswoman said.

Baroness Delyth Morgan, chief executive of charity Breast Cancer Now, said: "We urge the government to ensure there is sufficient capacity in the already-stretched workforce to meet the backlog and to avoid any cancers going undetected for longer."