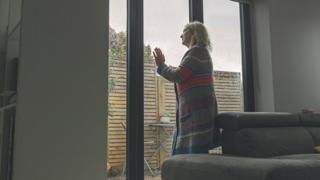 Two-thirds of people who have been shielding from the coronavirus in England say they are comfortable going back to work if protective measures are in place, figures suggest.

But one in 20 say they won't be returning anytime soon.

More than 2.2 million people in the UK have been staying at home with no visitors, because of a high risk of serious illness from Covid-19.

From 1 August, most no longer need to shield.

This is because infection levels in the community are falling, so the risk to clinically extremely vulnerable people is much lower than before.

Shielding has now been paused everywhere in the UK, except Wales - which is expected to follow suit on 16 August - and those parts of the UK which are subject to extra restrictions.

The figures - from the Office for National Statistics (ONS) - are based on a survey of more than 4,000 clinically extremely vulnerable people, conducted between 9 and 16 July.

It found that of the 623,000 people (28%) who were working before being advised to shield, most had either stopped working or been furloughed.

Of the rest, one in 10 was working outside their home in July, while more than a third worked from home.

When asked about their plans for working over the next few months:

One third of those shielding who normally worked said they were not at all comfortable with working outside the home. Despite this, some were already doing so, while a larger number still planned on going back to a workplace in the next few months.

This compared to 24% who were completely comfortable, and 44% who were happy to go back if their employer could put protective measures in place.

What has been the advice to clinically extremely vulnerable people?

from March onwards - letters or text messages were sent to this group by doctors, advising them to shield from other people until further notice

1 June - they can leave the house once a day, as long as they keep 2m from others

People in high risk categories, who include:

The list does not include all elderly people, although they are strongly advised to social distance.