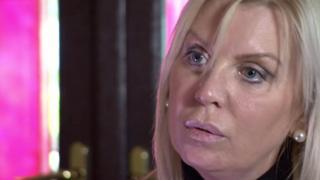 A cosmetic surgeon who did not have adequate insurance for operations that went wrong has been struck off.

One woman, from County Durham, cannot close her eyes properly after being operated on by Dr Arnaldo Paganelli, while others did not receive thousands of pounds in compensation.

The doctor worked privately for The Hospital Group in Birmingham.

Four women took their case to the body and the tribunal heard evidence about his time at Birmingham's Dolan Park Hospital where he made regular trips from Italy to work.

Lead campaigner Dawn Knight, from Stanley, County Durham, said too much skin was removed from her eyes during an eyelift in 2012 and they became "constantly sore".

She now wears special lenses, has to take eye drops every few hours and may require further surgery.

She told BBC Radio 4's You and Yours programme she felt relieved Dr Paganelli "cannot injure anyone else on UK soil" and called for the government to tighten regulation around cosmetic procedures to protect the public.

"The process has been long, emotional and exhausting. This situation must never be repeated.

"After all, when are you more vulnerable than when under aesthetic at the hands of a surgeon who has no insurance?"

Dr Paganelli denied there were problems with Ms Knight's surgery and the tribunal did not hear any evidence about the medical side of her case.

Following bungled nose surgery, in 2015 Joanne McKay, of Crieff in Perthshire, was awarded £22,500 in compensation and £121,000 for legal costs in the civil courts. However, as with other claimants, she did not receive any money.

The tribunal heard Dr Paganelli did not submit a proper insurance claim relating to one patient while at other times he had a policy that did not cover his work in the UK.

He was declared bankrupt in February 2013.

During the hearing it emerged The Hospital Group, without admitting any liability, paid out almost £500,000 to some patients who complained and deducted up to £10,000 a month from Dr Paganelli's salary to help cover those costs.

The tribunal ruled the doctor was more concerned about protecting his ability to work in the UK than his patients.

The Hospital Group said he had not worked for it since it changed ownership in August 2016.

It added: "The group has put in place an aftercare package for patients, with an insurance-backed guarantee."