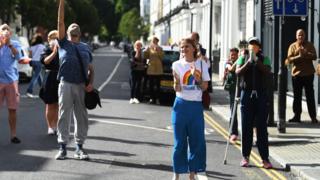 The restrictions of lockdown have fostered a new community spirit in Britain, but there are signs feelings of solidarity and togetherness are already beginning to fragment and fray.

That is the warning from a campaign called Together, which includes the NHS, charities, media groups and employers among its founders.

The organisation helped organise the birthday clap for the health service this month and is launching a national public consultation on how to avoid new community divisions opening up.

But there are expected to be challenging months ahead.

The survey of 2,000 adults by ICM, conducted during lockdown in May-June, found 45% of those questioned thought Britain had "never been so divided" during their lifetime. A similar poll, conducted just before lockdown in March, found 60% agreeing with the statement.

Asked if the country was "still too focused on what divides us", the poll findings suggest a fall from 70% agreeing in March down to 61% by the end of May.

A similar proportion in the later survey (62%) thought people had "lost the ability to discuss politics without getting angry and abusive".

However, analysis of the polling and other attitudes data has led to warnings that the spirit of unity fostered by the fight against Covid-19 may be dissipating.

"There's a risk that past divides are re-emerging as society starts to re-open," says Jill Rutter, director of strategy at the think tank British Future and author of the Together report.

"The shared experience of lockdown made many people feel more connected to their neighbours and local community. Now that sense of togetherness is starting to fray.

"The good news is that people would rather we kept hold of it."

Prof Robert West from University College London, a member of the behavioural science group which feeds into Sage, said the level of concern people feel about the virus was easing, and was even lower among young people.

He said this level of concern was the "key thing" which encouraged people to take the necessary action to protect their community. "We need to ramp that back up to appropriate levels."

Prof West told BBC Radio 4's Today programme a lack of direction and communication from government meant the public may not have a clear sense of the risk and what they ought to be doing now.

"I personally am not 100% clear about what the government is asking us to do," he said.

Prof West said the UK needs to have a strategy such as Scotland's goal of achieving "zero Covid" policy, "so we know we're heading in a particular direction". "At the moment it feels a lot like we're just drifting," he said.

Can you answer these six basic questions about coronavirus?

What information do we collect from this quiz? Privacy notice.

The Together campaign precedes the pandemic and had already been looking at how to heal the "angry divides" over Brexit and political tribalism.

The revival of community spirit exemplified by the "clap-for-carers" during lockdown was seen as an opportunity to cement new connections at neighbourhood level.

The campaign helped organise the birthday clap for the NHS on 5 July, an event today's ICM poll suggests was attended by 14 million people across Britain, including Prime Minister Boris Johnson.

Participants were encouraged to "raise a cuppa or glass" with neighbours, to reflect on the connections that have been made during the lockdown and consider how to strengthen our communities for the next stage of the crisis.

That process now enters a new phase with the launch of "talk/together", a national conversation the organisers hope will be the biggest public consultation since the census.

Discussion groups will be held in every region of the UK with an online survey that is expected to attract hundreds of thousands of visitors.

The consultation is intended to help the country navigate a peaceful path through what is expected to be a significant recession.

In the foreword to today's report, the Bishop of Leeds, Nick Baines, writes: "We are entering a period of deep economic uncertainty, one that will heighten existing inequalities and strain our society further still.

"We must start to disagree better: Recognising and respecting our differences while remembering our common humanity and citizenship, with all the mutual obligations these demand of us."

What positive aspect are you taking away from lockdown? What will you continue to do? Share your experiences by emailing haveyoursay@bbc.co.uk.

Please include a contact number if you are willing to speak to a BBC journalist.