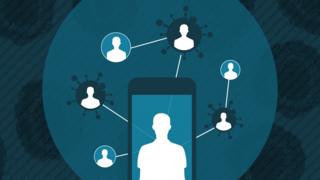 People who have been in close contact with someone found to have Covid-19 are now being traced and asked to self-isolate for a fortnight.

But what happens when someone who went to the same pub or restaurant as you tests positive?

If you develop coronavirus symptoms and test positive, you'll be contacted by text, email or phone and asked to log on to the NHS Test and Trace website.

There you must give personal information, including:

Contact must have taken place within a nine-day period, starting 48 hours before symptoms appeared.

No-one contacted will be told your identity.

A parent or guardian must give permission for a call with under-18s to continue.

Organisations in certain sectors - like pubs and restaurants - must collect and keep customer details for 21 days.

It's because there's a higher risk of transmitting Covid-19 in public places - both inside and outdoors - where people are near others they don't live with.

Giving personal information is voluntary and it is not the venue's responsibility to ensure it's correct.

If a customer tests positive, will the pub or restaurant have to close?

Possibly, but not necessarily.

Official government advice says an NHS Test and Trace call does not always mean a pub or restaurant must close.

It depends on the circumstances and when the infected person visited.

NHS Test and Trace could ask staff to:

Local health protection officials have the power to close establishments.

Pubs in England have been allowed to reopen since 4 July, although a couple had to temporarily close after customers tested positive.

What if I am contacted?

Anyone deemed at risk of infection must stay at home for 14 days from their point of contact with the infected person.

You must self-isolate, even if you don't have symptoms, to prevent the virus spreading.

You should order food or medicine online or by phone, or ask friends and family to leave it on your doorstep.

Other people you live with won't have to self-isolate, unless they also develop symptoms, but they must take extra care around you regarding social distancing and hand washing.

Do I have to self-isolate?

It's currently voluntary. But the Department of Health says it may check up on people and could impose fines.

How is the tracing scheme going?

The scheme - which the prime minister claimed would be "world-beating" - was launched on 28 May. From then until 22 July:

The proportion of people reached and asked to self-isolate has been falling since the programme launched.

Sage, which advises the government, has said that at least 80% of contacts would need to isolate for the test and trace system to be effective.

While the overall figure is above 80%, figures for the last three weeks have been below that level.

Plans for an app were abandoned in mid-June, with ministers now working towards a model based on Apple and Google technology.

Privacy campaigners say England's tracing scheme has broken a key data protection law. The government conceded the initiative was launched without carrying out an assessment of its impact on privacy - but said there was no evidence of data being used unlawfully.

What about other parts of the UK?

Northern Ireland is the first part of the UK to roll out a smartphone contact tracing app.

How do I avoid scammers?

What about sick pay?

If people can't work from home, the government says employers must ensure any self-isolating employee receives sick pay and let them use paid leave days if they prefer.

Self-employed people who are self-isolating but can't work from home can apply for an income support scheme grant, the government says, although this is designed to cover three months' worth of profits.